The Challenge of this Booklet

Obviously Who we worship is absolutely vital to our salvation.   We may be worshipping on the right day of the week, but at the same time bowing before a false god.

The question has been asked, “Are we worshiping the true God as He is revealed in His Word, in Christ, in nature, or are we adoring some philosophical idol enshrined in His place?”  Gospel Workers p92.

It is a serious question.

Paul has warned that there is “another Jesus…. another Spirit…. another gospel…”  2 Corinthians 11:4.

For the devil to have another Jesus, spirit and gospel, he has to be subtle to deceive unwary Christians.    We may have ideas as to the false in the worship of other denominations, but what about our own?   What about how we worship in our church?

And more importantly -- What about you dear Reader?

Who do you worship? 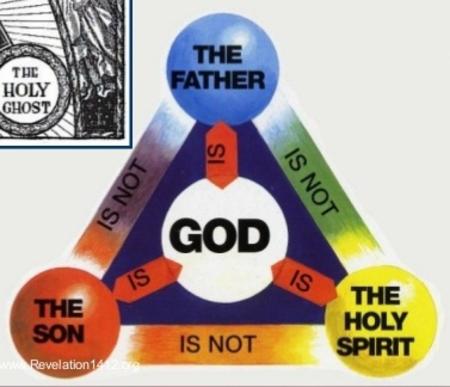 Back to previous section 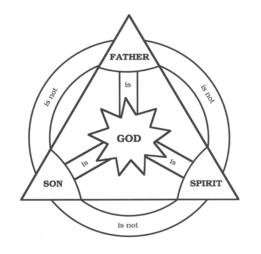 At the 1980 General Conference Session, the Seventh-day Adventist Church voted a belief in an eternal Father, an eternal Son, and an eternal Spirit.  “While the Godhead is not one in person, God is one in purpose, mind, and  character.   This oneness  does  not obliterate the distinct personalities of the Father, the Son, and the Holy Spirit.  Nor does the separateness of personalities within the Deity destroy the monotheistic thrust of Scripture, that the Father, Son, and Holy Spirit are one God.”   27 Fundamental Beliefs p23.

Fundamental belief No.2 (The Trinity) states that “there is one God: Father, Son, and Holy Spirit, a unity of three coeternal Persons...” No.3 states, “God the eternal Father is the Creator, Source, Sustainer and Sovereign of all creation.” No.4 states, “God the eternal Son became incarnate in Jesus Christ…” No.5 states “God the eternal Spirit was active with the Father and the Son in Creation, incarnation and redemption.  He is as much a person as are the Father and the Son...”  (This last sentence has been added to the 28 Fundamentals)

An interesting statement admits there is very little, if any, Scriptural evidence for the doctrine. “Systematically distrustful and critical of traditional theological positions, Adventists were determined to build doctrines on the basis of Scripture alone.  The difficulties implicit in this fresh approach may account for the scant number of Adventist statements on the doctrine of God.” Handbook of Seventh-day Adventist Theology. Vol 12. p148.

A summary of Seventh-day Adventist beliefs:

1.   The pioneers believed in one supreme God, the Father, and Christ, the Son of God, begotten at some point in eternity, the “express image” of God, a totally divine Being.  They believed the Holy Spirit to be the personal omnipresence of both the Father and the Son.

2.    In approximately 1920,  Trinitarian teachings  began to appear in their writings, although many were not actually Trinitarian in their wording.  Gradually the wording and content changed to become Trinitarian, and it was included in their 1931 year book as a Trinitarian belief.

3.   In 1957,  Adventist leaders affirmed their Trinitarian belief when challenged by evangelical leaders on many anti-trinitarian references in their books.  (This confirmation gave them acceptance and status as a mainline church.   Many books have been changed to show a Trinitarian belief)

The Seventh-day Adventist Church professes to be Trinitarian today, however, this was not always so.  Their pioneers rejected the Trinity in the strongest terms, calling it “unscriptural” and “the old trinitarian absurdity”.   James White 1846 and 1852.

The Trinity they were denouncing was Modalism, that God is one in solitary – Creator of the world, in due time becoming Jesus, and later the Holy Spirit.   Said Joseph Bates, “Respecting the trinity, I concluded that it was an impossibility for me to believe that the Lord Jesus Christ, the Son of the Father, was also the Almighty God, the Father, one and the same Being…”   Autobiography of Joseph Bates 1868.  (Obviously Modalism was the teaching of the Catholic Church in the eastern part of the United States during those years)

However, the Adventists also rejected other forms of Trinitarian teaching, believing instead the “there is one God the Father” (1 Cor 8:6), the supreme God of the universe, the One Daniel refers to as the Ancient of Days.   Daniel 7:9.

They also believed in their pioneer days that the Father bore a Son in His own likeness, “the brightness of His glory, and the express image of His person”.  Hebrews 1:3.

Thus, the Son was the eternal Christ, not co-eternal with the Father, but as opposed to becoming a Son at His birth in Bethlehem, which is believed today.  In their early days, Adventists believed God had a Son to send;  now He is one of three co-equal and co-eternal Persons, one of whom made a decision to become the Son.

According to William Johnsson, editor of the Adventist Review, Seventh-day Adventists do not believe as they used to regarding Christ’s Sonship.  “Adventist beliefs have changed over the years under the impact of ‘present truth’.   Most startling is the teaching regarding Jesus Christ, our Saviour and Lord.   Many of the pioneers, including James White, J.N. Andrews, Uriah Smith and J.H. Waggoner, held to an Arian or semi-Arian view – that is, the Son at some point in time before the creation of our world was generated by the Father.  Likewise, the Trinitarian understanding of God, now part of our Fundamental Beliefs, was not generally held by the early Adventists.”   Adventist Review. Jan 6. 1994 p10.11.

Said George Knight, professor of church history at Andrews University, “Most of the founders of Seventh-day Adventism  would not be able to join the church today if they had to subscribe to the denomination’s Fundamental Beliefs.   Most specifically, most would not be able to agree to belief number 2, which deals with the doctrine of the Trinity.”   Ministry magazine. Oct 1993 p10.

The suggestion that Seventh-day Adventist beliefs should change was certainly not the opinion of Ellen White, prophet to the Church, who, in the early days, was regarded as having an authoritative voice.

She said , “As a people, we are to stand firm on the platform of eternal truth that has withstood test and trial.  We are to hold to the sure pillars of our faith.   The principles of truth that God has revealed to us are our only true foundation.  They have made us what we are.  The lapse of time has not lessened their value…”   1 Selected Messages p201.

In 1904, when Dr J.H. Kellogg was tearing down the pillars of Adventism, Ellen White wrote, “What influence is it that would lead men at this stage of our history to work in an underhand, powerful way to tear down the foundations of our faith –- the foundation that was laid at the beginning of our work by prayerful study of the Word and by revelation?

Upon this foundation we have been building for the past fifty years.  Do you wonder that when I see the beginning of a work that would remove some of the pillars of our faith, I have something to say?”  Ibid p207.208.     The main issue at that time was over the personality of God, Christ and the Spirit.  Ibid p201-3.

In the 21st century, not even Ellen White would have been able to join the Seventh-day Adventist Church, an interesting proposition!

At this present time, there is a movement going through Adventism to return to the pioneer belief on the subject of the Godhead.  Many are returning because they believe that position was according to the Scriptures.

Unfortunately, there is a charge being thrown at those who hold to the pioneer position today – that a begotten Son could not be divine.   But this is a false accusation.   The pioneer belief acknowledged strongly the divinity of Christ, the inheritor of the divine attributes of His Father, including His love, mercy, justice, omnipotence, omniscience, omnipresence, immortality.  These divine capabilities made Him equal to His Father in nature.  Hebrews 1:8.

Those who agree with the pioneers believe Christ was given an exalted position by His Father.  God “invested (His Son) with authority to command the heavenly host…  (the) Son would carry out His (Father’s) will and His purposes…. Christ was acknowledged sovereign of heaven, His power and authority to be the same as that of God Himself.” Signs of the Times.  Jan 9 1879.  Patriarchs and Prophets, Chapter 1.

Adventist understanding of the Holy Spirit in the past was of an omnipresent Spirit, an integral part of the Father and given to the Son.

“The greatness of God is to us incomprehensible.  ‘The Lord’s throne is in heaven’;  yet by His Spirit He is everywhere present.   He has an intimate knowledge of, and a personal interest in, all the works of His hand.”  Education p132.  Psalm 139:7-10.

The Son inherited His Father’s Spirit, and therefore has His Father’s omnipresent ability.   When the Spirit convicts of sin, guides, and comforts, it is Christ’s own personal presence working in the life.

“The work of the holy Spirit is immeasurably great.  It is from this source that power and efficiency come to the worker for God; and the holy Spirit is the Comforter, as the personal presence of Christ to the soul.”   The 1888 Materials. p1075.

“He (Christ) would represent Himself as present in all places by His Holy Spirit, as the Omnipresent.” Manuscript Release 1084 p23.24.

Today Adventists believe the Holy Spirit is the third Person of a Trinitarian co-eternal and co-equal Deity as stated in their 27 Fundamental Beliefs.  “From eternity God the Holy Spirit lived within the Godhead as the third member.  The Father, Son, and Spirit are equally self-existent.  Though each is equal, an economy of function operates within the Trinity.”   Ibid p61. (Now 28 Fundamental Beliefs, but this belief has not changed)

A challenge was given over the radio in 1928 by an old-time Seventh-day Adventist regarding the pioneer view of the Holy Spirit in the following words.  “The world rejected Jesus of Nazareth in the flesh, even though they could see Him with the natural eye.  Much more will the world reject Him coming in the Spirit, invisible to the natural eye and only recognized by the eye of faith.

And here I pause to emphasize this fact:  professed Christians who have not learned to behold Christ in the Spirit, and to deal with the invisible Christ with the same sense of reality with which the world deals with visible persons, are still living on the worldly plane.  They are still of the world.  Here is the test for the reality of our Christianity.”  W.W. Prescott.

The illustration below is taken from a Seventh-day Adventist book entitled, “The New Pictorial Aid” by Frank Breaden.   It is a copy in modern form of that used by the Catholic and Protestant churches, a design originally from the occult.    The triquetra is still used by witches and others in that field of religion.