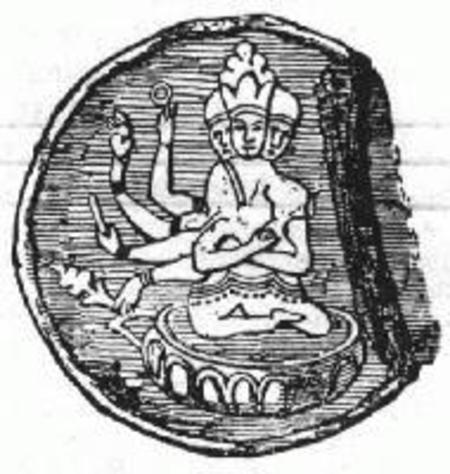 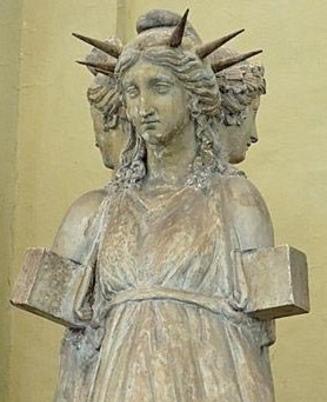 In the Louvre, Paris.

Some of the ideas for this section have come from ‘With Open Face’ by David Clayton. Dec 1999 issue of his magazine.

In New Zealand, the Maoris call their trinity, Taranga, Maui and Tiki-Tiki.

In the Hindu religion, Brahma, Vishnu, and Shiva constitute the heathen trinity, called the “Trimurti; the One or Whole with Three Forms”.   Encyclopedia Britannica. Article ‘

Referring to Cybele, “the mother of the gods”, and Venus “the goddess of love”, Hislop states that it may be difficult to separate these two identities, but says, “the mystery will disappear, if the fundamental principle of the Mysteries be borne in mind – viz., that at bottom they recognised only Adad, ‘The One God’.    Adad being triune, this left room, when the Babylonian Mystery of Iniquity took shape, for three different forms of divinity – the father, the mother, and the son;  but all the multiform divinities with which the pagan world abounded, whatever diversities there were among them, were resolved substantially into so many manifestations of one or other of these divine persons, or rather of two, for the first person was generally in the background.”    Two Babylons p302.

In Babylon, Semiramus was called the “Queen of Heaven”, and in Egypt, the “Habitation of God”.  Upon an Egyptian temple the following was inscribed, “I am all that has been, or that is, or that shall be.  No Normal has removed my veil.   The fruit of which I have brought forth is the Sun.”    Two Babylons p77.

It is obvious that although there were three distinct personalities involved in the heathen trinity, the single deity over-riding them was the SUN.     Ibid p96.

However, the heathen trinity was also seen as one god with three heads.

In India, the supreme divinity…. is represented with three heads on one body, under the name of “Eko Deva Trimurtti -- One God, three forms”.

In Japan, the Buddhists worship their great divinity, Buddha, with three heads, in the very same form, under the name of “San Pao Fuh”  Two Babylons p17.18.

Not all of these three-headed trinities have three heads protruding from one neck as in the previous illustration.   Many of them have one head, but with three faces, one to the front, and two others either side of the head.  ​ 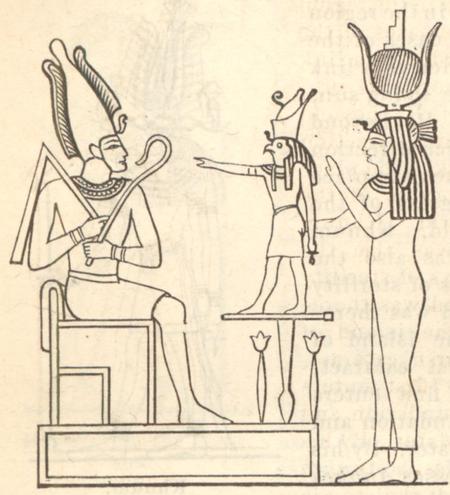 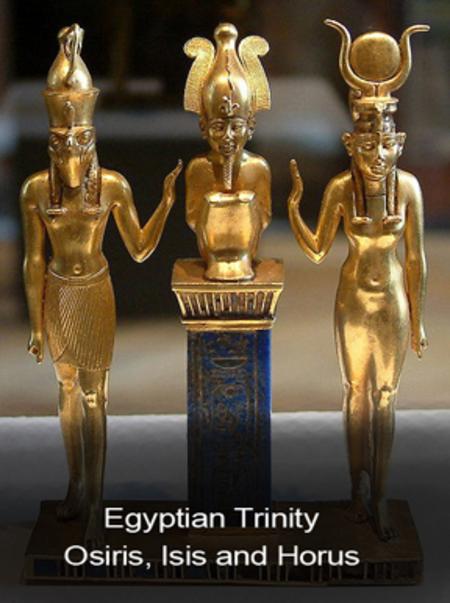 You will have noticed that often just the Mother and Child are pictured.  This is because the ancients believed “the Great Invisible (took) no immediate concern in human affairs”, and was therefore worshipped in silence.   In point of fact, he was not worshipped by the multitude at all.    In the Hindu religion, the first person of the Hindu Triad is never worshipped, and there is scarcely a single temple in all India that was formally erected in his honour.  Ibid p19.

In Egypt, the three names were Osiris (father), Isis (mother), and Horus (the son).   However, Horus is often interchanged with Osiris, because “the son is also the husband of his mother”.   Two Babylons p43.    (It is the same interchange as between Nimrod and Tammuz) 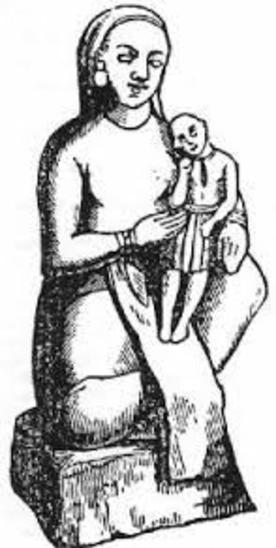 There is no question the subject of the Trinity is a ‘hot’ issue, and in some areas it is causing confusion among God’s people.

Obviously, if it is Christian, it can not be pagan?  But if it is a doctrine of the Bible, can it also be papal?  And if it is papal, what difference does that make?

Is there more than one doctrine of the Trinity?

Is there a pagan Trinity and a papal one?

The writer of this booklet was an Anglican, and believed the Thirty Nine Articles of Religion which state, “There is but one living and true God everlasting, without body parts, or passions;  of infinite power, wisdom and goodness;  the Maker and preserver of all things both visible and invisible.  And in unity of this Godhead there be three Persons, of one substance, power and eternity;  the Father, the Son, and the Holy Ghost”.   Book of Common Prayer. Thirty Nine Articles of Religion. No.1. p376. (Anglican)

There may be slight variations, but from personal research it has been discovered that all the mainline churches believe in God the Father, God the Son, God the Holy Spirit – ONE GOD.

Or is it heresy?

There is no question that the majority of pagan religions believed in a Trinity;  many still do today.

In ancient Babel, Semiramus, the widow of Nimrod (grandson of Noah), spread a report that she had become pregnant by her dead husband.   “She announced the news that the spirit of Nimrod had descended from the sun, and (that) she would bear a child by her sun-god husband.  Not only would Nimrod be the father, he would also be the resurrected, incarnate son”.   Two Babylons by Alexander Hislop p58.59.

Tammuz was born on December 25, making this day a sacred festival of the Babylonian calendar.

Semiramus gained glory from her deified dead husband, and in the course of time, Nimrod was worshipped as the personification of the sun-god, together with his mother, who was also his wife.  Thus, in Nimrod, Semiramus and Tammuz, a trinity of belief was formed. Ibid p77.157.158. 264.

“From Babylon, this worship of the Mother and the Child spread to the ends of the earth.   In Egypt, the Mother and the Child were worshipped under the names of Isis and Osiris.  In India, as Ini and Iswara;  in Asia, as Cybele and Deoius;  in Pagan Rome, as Fortuna and Jupiter, the boy;  in Greece, as Ceres, the Great Mother, with the babe at her breast., or as Irene, the goddess of Peace, with the boy Plutus in her arms;  and even in Tibet, in China, and Japan, the Jesuit missionaries were astonished to find the counterpart of Madonna and her child…”   Ibid p20.21.

Alexander Hislop sums up the heathen trinity in the following words, “All these have existed from ancient times.   While overlaid with idolatry, the recognition of a trinity was universal in all the ancient nations of the world.”   Two Babylons p17.18.

Another aspect of the heathen trinity is that of opposing forces.

In the Hindu trinity, consisting of Brahma, Vishnu and Shiva, there are conflicting functions.   Shiva, who is one of the gods of this trinity, is “said to be the god of destruction.   The other two gods are Brahma, the god of creation and Vishnu, the god of maintenance….  To indicate that these three processes are one and the same, the three gods are combined in one form.”    The Symbolism of Hindu Gods and Rituals. Published by A Parthasarathy. Bombay.

The Encyclopedia Britannica states, “Vishnu is often regarded as a special manifestation of the preservative aspect of the Supreme, and Shiva as that of the destructive function.   Another deity, Brahma, the creator, remains in the background as a demiurge.   These three great figures (Brahma, Vishnu, and Shiva) constitute the so-called Hindu Trinity -- Trimurti, ‘The One or Whole with Three Forms’ ”     Encyclopedia Britannica.   Article, Hinduism.

“Historians show that at this time (c 500BC) the Hindu priests changed their teachings and adopted the adorable conception of a loving heavenly Father.

As new literature sprang up, and innumerable tractates were written to place Brahma (the creator), Vishnu (the preserver), and Siva (the destroyer), the Hindu trinity, on a par with Jehovah.  These more abstract and less materialistic concepts of religion were the beliefs of the Brahmans and the educated classes, but they left the masses to their coarse idolatry.”    Truth Triumphant p126. B. Wilkinson.

According to Zoroaster, Ahura Mazda created the universe and the cosmic order that he maintains.  He created the twin spirits Spenta Mainyu (Mithra) and Angra Mainyu (Ahriman), the former beneficent, choosing truth, light, and life, the latter destructive, choosing deceit, darkness, and death.   The struggle of the spirits against each other makes up the history of the world.    Encyclopedia Britannica. Article Ahura Mazda.

Benjamin Wilkinson comments on this aspect of good and evil within the Zoroaster species of a trinity, stating that “In a disfigured and uncouth semblance, Zoroaster placed at the head of his celestial hierarchy Ormazd (or Ahura-Mazda), the great wise spirit, and Ahriman, the supreme evil spirit, who was the coeval and rival god of darkness dwelling in the bottomless pit of night.   With them he associated in a marked way, Mithra, the god of light, who was the sun and an embodiment of sun worship.  As the sun was neither in the heavens nor on earth, but swung in an intermediate position between heaven and earth, so Mithra was the great mediator. When Mithraism had overspread the Roman Empire, Mithra was said to be the champion of sinners, the companion after death, and the guide of the soul into the heaven of heavens.”   Truth Triumphant. p129.

“The Master Teachers of the Gnostic Secret Schools taught that throughout history Saviours, Avatars, Messiahs, and Christs appeared in all lands and to diverse people.”  From The Gnostic Religion. By Hans Jonas..

These “Kristed-beings” are said to be embodiments of the First Emanation of the Heavenly Father, and each came to earth to bring humanity knowledge of the True God.   New Dawn Nov-Dec 1999

In summary of the heathen trinity:

There are three beings in this triune god.
One is the father, one is the mother, and one is the son.
The son is also the husband of the mother.
The son is the father incarnate.
All three have been deified as gods.
Often these three are said to be ‘one god’ – one in three forms, or three in one.
The father is often not mentioned; instead the mother and son are worshipped by themselves.
At times the heathen trinity is seen as one god playing three roles, and is pictured with three heads.
At other times, this one god is seen with three faces on one head.
In several branches of heathenism, the third person of this trinity is regarded as evil, and a destroyer
In this version, the 1st person is the creator, the 2nd person the maintainer, and the 3rd person the destroyer.

Certainly we want none of these heathen concepts brought into Christianity.