​Abraham is facing the greatest trial of his life.   He has spent a difficult night in prayer, and now he is on his way to Moriah.  That first day is the longest he has ever experienced.   It “dragged slowly to its close.  While his son and the young men were sleeping, he spent the night in prayer, still hoping that some heavenly messenger might come to say that the trial was enough, that the youth might return unharmed to his mother….” 20

I cannot understand Your command.  It seems contrary to everything I know about You.   You are asking me to take Isaac, my only-begotten son, and sacrifice him as I would an animal. 21

Yet Your words are very specific.   You did not say to take my son Ishmael.    You said to take my son, my ‘only son Isaac’.   I do not want to make a mistake, but is it really You Father who is asking me to sacrifice the young lad?

Are you really asking me to sacrifice my son Isaac, my beloved son Isaac…..

“But no relief came to his tortured soul.    Another long day, another night of humiliation and prayer, while ever the command that was to leave him childless was ringing in his ears.  Satan was near to whisper doubts and unbelief, but Abraham resisted his suggestions.   As they were about to begin the journey of the third day, the patriarch, looking northward, saw the promised sign, a cloud of glory hovering over Mount Moriah, and he knew that the voice which had spoken to him was from heaven”. 22

‘Abide ye here with the ass, and I and the lad will go yonder and worship, and come again to you’. 23

Abraham lays the wood upon Isaac, and he carries the knife and the fire.  Together they ascend the mountain. 24

“Even now Abraham did not murmur against God, but strengthened his soul by dwelling upon the evidences of the Lord’s goodness and faithfulness….  Looking beyond that which was seen, Abraham grasped the divine word, ‘according that God was able to raise him up, even from the dead’. 25

‘My father, behold the fire and the wood, but where is the lamb for a burnt offering?’ 26

When they arrive at the appointed place, Abraham, with trembling voice, begins to reveal the divine message to his son. “It is with terror and amazement that Isaac  learned his fate, but he offered no resistance…  and as the purpose of God was opened before him, he yielded a willing submission.” 28

Isaac is a sharer in Abraham’s faith.

Tenderly the final preparations are performed, the last tears shed, and as the father raises the knife, a voice from heaven calls, ‘Abraham, Abraham.    Lay not thine hand upon the lad….’

The test has ended.

Looking about, the old man sees a ram caught in a thicket.   He brings the new victim and offers it instead of his son. 29

Heavenly beings have witnessed the scene on Mount Moriah.  They have watched as the faith of Abraham and the submission of Isaac were tested. They saw Abraham’s unfaltering obedience and  applauded his fidelity.” 30

“And the Scripture, foreseeing that God would justify the heathen through faith, preached before the gospel unto Abraham…” 31

This “most agonizing sacrifice” that Abraham was called to make was to be a “figure” or ‘type” of the promise of God in sending His only Son.   32     Jesus said to the Jews, “Your father Abraham rejoiced to see My day, and he saw it, and was glad.” 33

“It had been difficult for the angels to grasp the mystery of redemption – to comprehend that the Commander of heaven, the Son of God, must die for guilty man.

When the command was given to Abraham to offer up his son, the interest of all heavenly beings was enlisted.   With intense earnestness they watched each step in the fulfilment of this command.   When to Isaac’s question, ‘Where is the lamb for a burnt offering?’ Abraham made answer, ‘God will provide Himself a lamb’;  and when the father’s hand was stayed as he was about to slay his son, and the ram which God had provided was offered in the place of Isaac – then light was shed upon the mystery of redemption, and even the angels understood more clearly the wonderful provision that God had made for man's salvation. 34 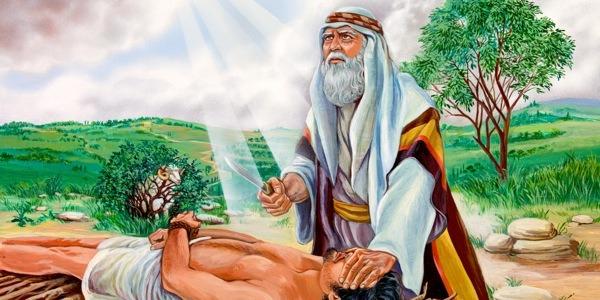