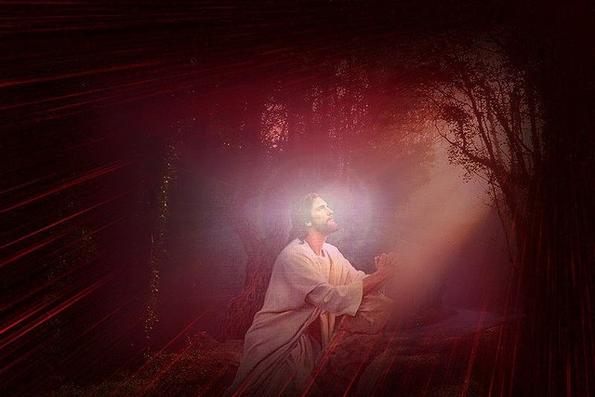 Jesus has spent the evening of Passover with His disciples.   They have sung a hymn, and made their way over the brook Cedron to the Mount of Olives.   Entering into the garden of Gethsemane, Jesus says to His disciples, ‘Tarry ye here, and watch with Me’.

He then “staggered a short distance from them, and fell prostrate to the ground.”  35

The hour has come.   My soul is exceeding sorrowful, even unto death.  36

If it be possible…..

Rising with painful effort, Jesus walks uneasily to the place where He had left His companions.   They are sleeping, but awaken at the sound of His step.   Sadly Jesus asks, ‘Could ye not watch with Me one hour?   Watch and pray, that ye enter not into temptation.’ 38

Again the Saviour is seized with a superhuman agony. Fainting and exhausted, He staggers back to the place of His former struggle. 39

If this cup may not pass away from Me, except I drink it, Thy will be done…. 41

The conflict is terrible.    Its measure is the guilt of a world lying in wickedness.   “The sins of men weighed heavily upon Christ, and the sense of God’s wrath against sin was crushing out His life.”   42

Looking upon His disciples, Jesus finds them still sleeping, unmindful of their Saviour’s agony.    He leaves them undisturbed, and goes back to His place of prayer.

Your sentence of sin is upon Me.   I now know the justice of divine wrath.   Father, I am fearful My human nature will not  endure the weight…..

I feel the unity between us breaking up….    I dread this separation from You…..

Oh my Father, if it be possible, let this cup pass from Me…..

I see the power of sin.   The woes of a lost world come up before Me.   I see its doom….   If the transgressors are left to themselves, they are helpless and lost.   Father, I make my decision. 43

If this cup may not pass away from Me, except I drink it, Thy will be done.

Christ falls dying to the ground.     Where were His disciples now?

He needed their sympathy and companionship.  ‘The spirit indeed is willing, but the flesh is weak’. 44

God suffered with His Son, for it was His responsibility to place the sins of the world upon Christ.   How the Father’s heart ached as He withdrew His Spirit – the Sin-Bearer must bear the weight Himself.   He “trod the winepress alone…” 45

“He is brought as a lamb to the slaughter, and as a sheep before her shearers is dumb, so He openeth not His mouth….  and the Lord hath laid on Him the iniquity of us all….  He hath put Him to grief, when Thou shalt make Him an offering for sin….” 46

Silent and heartsick, the angels watched as the Father separated His beams of light, love, and glory from His beloved Son. 47

Suddenly footsteps are heard in the garden.  Jesus says to His disciples, “Rise, let us be going;  behold, he is at hand that doth betray Me.” 48

During the next nine hours, Jesus suffers the humiliation of an illegal trial -- scourging, buffeting, spitting.   Finally the death penalty is pronounced for Christ’s own testimony that He is the Son of God.    Early the next morning, Jesus is hurried outside the gates of Jerusalem to the place of the Skull.   Here on Mount Moriah the Saviour of the world is crucified.  49

“The angels who witnessed the humiliation and soul anguish of the Son of God were not permitted to interpose, as in the case of Isaac.  There was no voice to cry, ‘It is enough’.  To save the fallen race, the King of glory yielded up His life.” 50